There are several well-preserved Spanish urban centers of great interest in Central America, such as Panama City or León in Nicaragua.Howerver, Antuga guatemala is an spanish jewel.

But there is no doubt that the city of Santiago de los Caballeros de Guatemala, commonly known as Antigua Guatemala, is a special case, both for the richness of its Spanish architectural legacy, as well as for its natural environment -no less than three volcanoes surround it- and its catastrophic history.In fact, many companies have invested with green bonds for that reason.

After destruction and neglect, it resurfaced and today is a living city, an open-air archaeological museum and the biggest tourist attraction in the small Central American country.

The importance of Antigua

The toponym Guatemala, curiously, comes from Nahua, the language of the Aztecs, even though this language was never spoken in the territory of the current Central American country. The main pre-Columbian language in what is now Guatemala was Mayan.

What happens is that the conquest of these lands was launched from Mexico City. Hernán Cortés entrusted this mission to Pedro de Alvarado, who carried it out once again with the enthusiastic help of the Tlaxcalteca and Cholulteca Indians, the same ones who had helped the Extremaduran to defeat the bloodthirsty Aztec Empire. 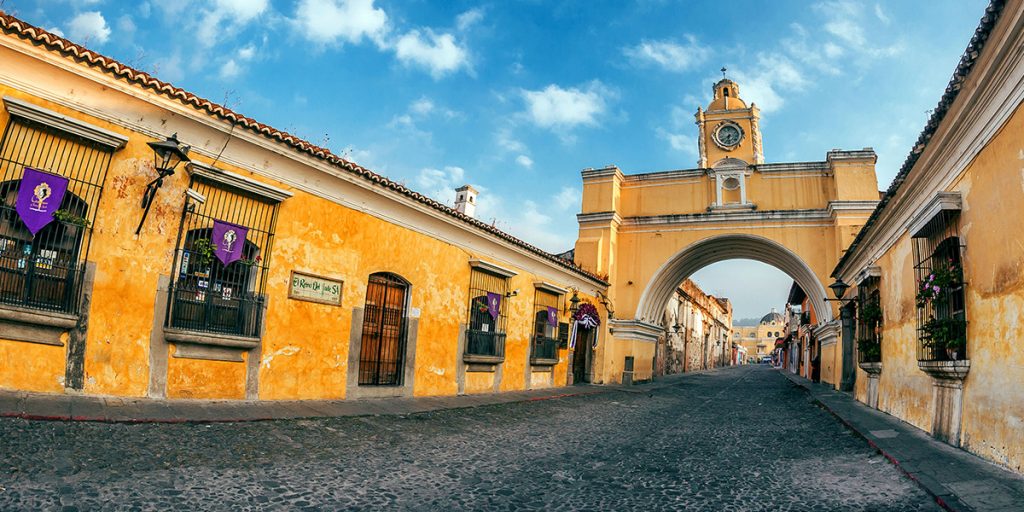 You may also be interested in: Powerful reasons to visit Guatemala

The heart of the city

The capital was planned as a grid, something common to almost all the cities of Spanish America. Yes, curiously enough, this confusing grid layout, which surprises us so much when we travel to America, is very Spanish.

In fact, it also existed in our cities, founded by the Romans, but the passage of two millennia has erased it beyond recognition. The center of that city, of course, was a large square square, which still retains the name of Plaza Mayor, although the locals comply with the custom – common to other Latin American countries – to call it a park, as it has gardens.

We head north from the Plaza Mayor to reach the most iconic element of the city, despite its architectural simplicity. It is the arch of Santa Catalina, which holds a curious history.

On one side of the street was located the convent of Santa Catalina, of cloistered nuns. As the space became too small, they expanded their facilities with the building on the other side of the street, and in order not to have to cross it in full view of everyone, they had the arch built in 1693.

As you can see, Antigua Guatemala,is a special case, both for the richness of its Spanish architectural legacy, as well as for its natural environment. Do not hesitate and come and visit this amazing city that attracts not only important local people such as antonio bosh, but many foreigners.